The goalkeeper has been linked with an exit away from Old Trafford after failing to get much playing time with the club.

Many offers have been pouring in for Dean Henderson but still he decided to stay with Manchester United and fight for starting place. 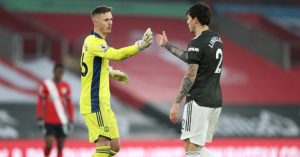 Things have failed to work out for the England International who barely get any regular playing time at Old Trafford this season.

David de Gea recent form has seen him reclaimed his number one position permanently after he was dropped a couple of games.

This has led to the number two goalkeeper rethinking his decision to remain with the club where he has been unable to get more playing time.

Dean Henderson was hoping to secure a move elsewhere this January but nothing happened as the club didn’t allow him make the switch.

Although those from the camp of Utd has confirmed nothing like that happened during the January transfer window.

There are no talks between Man Utd and Newcastle about Martin Dúbravka for Dean Henderson swap deal.

Here Is What Was Said According To Fabrizio Romano:

“There’s no truth at all”, Eddie Howe confirms.

“Man United will decide Henderson future in the coming months – as he wants to play regularly.

Although the club knows that the goalkeeper is already growing frustrated after coming off a successful loan stint with Sheffield United. 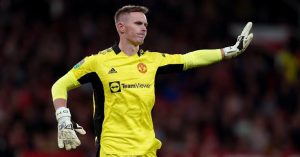 Dean Henderson could have joined Chelsea last season as the Blues made contact with the Red Devils which was immediately turned down with an extension signed.

Things since then have failed to work out as David de Gea is on the best form of his football career which recently saw him being crowned player of the month for January.