Holly has been commanding all of the focus ever since she was a teenager.

She has done so in various capacities, including as a golfer and reporter, presenter, and journalist.

The former golfer is probably most recognized for her role as “Morning Drive” host on the Golf Channel.

Sonders is now an influencer who started in Golf while working and taking social media by storm with her shocking photos.

Having stated all of these things, it is true that she has attracted huge crowds and a lot of fans even though controversy surrounds her. 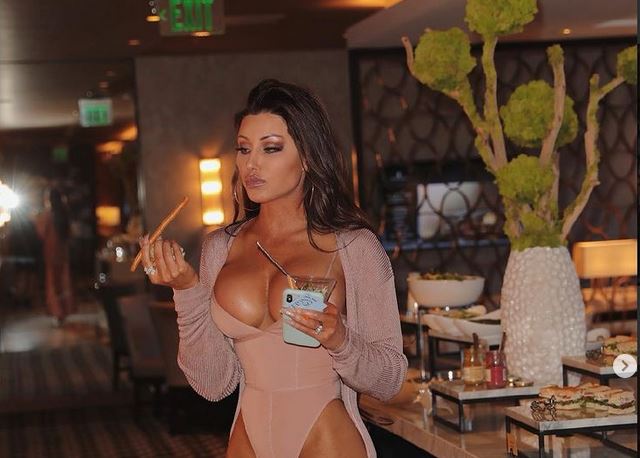 She was born in Ohio, United States, and has the zodiac sign of Pisces.

Her father was a doctor, her mother was a professional golfer, and they had two children.

At the tender age of seven, Holly won a junior golf event and became an outstanding player.

For example, She played sports at Marysville High School, where she competed on the boys’ baseball and basketball teams during her time there.

She earned a spot as the starting point guard for the women’s basketball team, where she played for four years.

Her mother was a significant factor in her life from the moment she became a teenager.

She always wanted to pursue a career in golf because of her mother’s impact.

Later, when she was a student at Michigan State University, she helped lead her team (the Spartans) to reach top competitions.

In addition, she participated in the NCAA Regional Tournament and the NCAA Championships during her career.

She also earned Academic All-Big Ten honors during her trip. 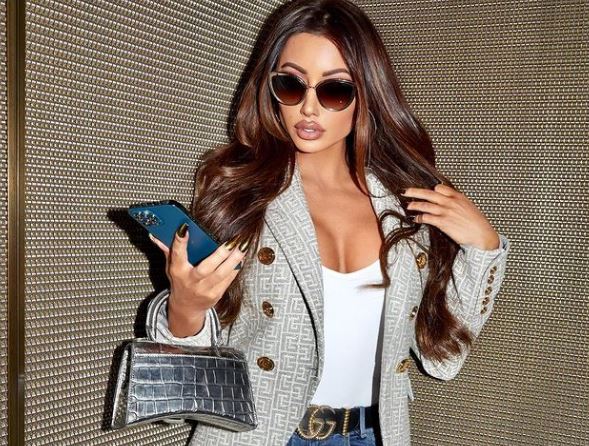 Holly is now a businesswoman and journalist in Golf. She has a fanbase of thousands of fans.

After her surgery, Sonders was featured on KATV in Little Rock, which opened the door to a plethora of new opportunities.

Immediately after that, she started working as a reporter, where she acquired on-the-job training while covering homicides and tornadoes (On-the-Job Training).

She got a taste of the fluidity of broadcast journalism without wasting much of her time.

She moved to a more important place, WBNS-10 TV in Columbus, located in Ohio.

Holly served as a reporting member for the Big Ten Community in her employment.

She then applied for a position with the Golf Channel, using the valuable on-the-job training she had obtained working as an area reporter for KATV.

Holly was turned down the first time, but she kept trying, and eventually, she was successful.

She joined NBC’s Golf Channel, which played a key role in her successful career.

However, Sonders was unable to pursue a career as a Golf player.

She was able to make her dream come true differently by hosting shows like “Playing Lessons with the Pros” and “School of Golf.”

Right now, she worked with Erik Kuselias, who would later become her husband, and had the opportunity to meet many golf celebrities, which led to an enormous rise in fame.

In the meantime, she began pursuing her possibilities with Golf Channel Morning Drive, armed with her newly acquired expertise on golf engagements.

In the beginning, many people’s reactions to her appearance on the shows were adverse, stating that she was merely treated as an object.

However, Sonders took a laid-back approach to the situation.

She explained that a woman can be both two different people at the same time and that the fact that her dressing is only based on her style. 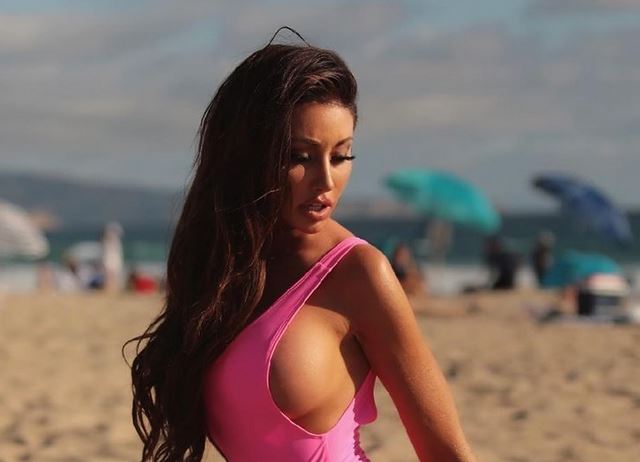 So many fans want to see the nude of Holly Sonders, but sadly, it is not available.

Holly Sonders is a stunningly beautiful woman who possesses a voluptuous and curvy body and has the measurements of 36-24-35.

Her body is stunning. In addition to this, she is physically fit.

She is conscientious of her appearance and takes care to maintain it.

Also, Holly has luscious, long, dark hair that cascades loosely down her shoulders and cuts her face like a knife.

In addition, she has a round face with a tanned complexion, large brown eyes, and an oval shape.

Her facial structure has been expertly sculpted to give her the appearance of having the ideal amount of edge.

When we examine her feet’s size, she wears a shoe number 7, but her bra size is 32D.

A cloud began to gather over Sonder’s life when those events were unfolding so magnificently.

As a direct result, Holly had an unspecified knee injury that rendered her unable to walk for the upcoming months.

While a junior at Michigan State University, she struggled with a burning knee, making her days more difficult than usual.

Despite this, she demonstrated that there is more than just one door open to you.

She decided to pursue a degree in journalism instead of working on getting over it, and she completed her studies and graduated from the university in 2009.

After that, she decided to pursue a career as a journalist, which was a very straightforward choice given that she had a background in golf and enjoyed her academics. 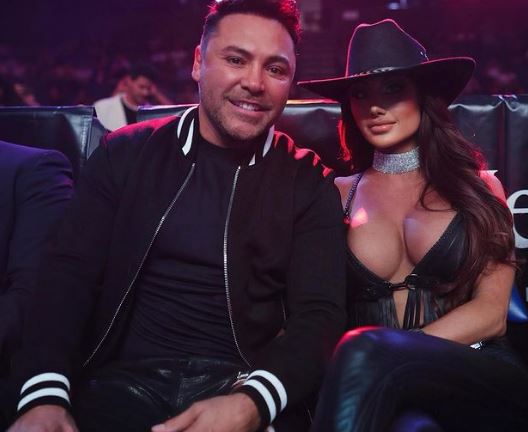 During Sonders’ time as a co-host on Morning Drive alongside Kuselias, they had their first encounter with one other.

Despite Erik’s notoriety giving him a negative image, they moved quickly to get romantically involved.

After courting one another, the couple finally got married in 2012.

During that period, Kuselias was well-known for engaging in pointless affairs and flirting with the majority of women.

Later on, Sonders found out that Kuselias was previously married and had three children when he became engaged to Holly and tied the knot with her; consequently, they divorced in 2016.

According to the information obtained from the sources, Kuselias’ ex-wife found that he was unfaithful during the marriage.

In the beginning, Sonders did not discuss the dissolution of their marriage until one of Kuselias’ admirers tweeted about him in a piece that she had written.

After she had filed for divorce, she began a relationship with Kliff Kingsbury, the head coach of the Cardinals.

The news that the two were dating became public in 2019 when she wrote about Kingsbury.

When she worked as a sideline reporter for Big 12 Games and Kingsbury was newly single, they first crossed paths.

However, it is unfortunate to report that their love affair did not last long and quickly fizzled out.

Holly Sonders began a relationship with Dave Oancea, sometimes known as Vegas Dave, in December of 2019.

They had been partying their way to another strip club, Sapphire, when they first crossed paths in the establishment known as Crazy Horse, which housed a strip club.

They made the happy announcement of their engagement not too much time after their first date.

They were quarantined together in Mexico at the very same time that COVID 19 was wreaking havoc around the world.

Hence, they shared images of their days while they were under lockdown in Cabo.

However, after a short time, Dave moved back in with his parents, leaving Sonders on her own.

The fans went crazy over this development, portraying it as a breakup between them. 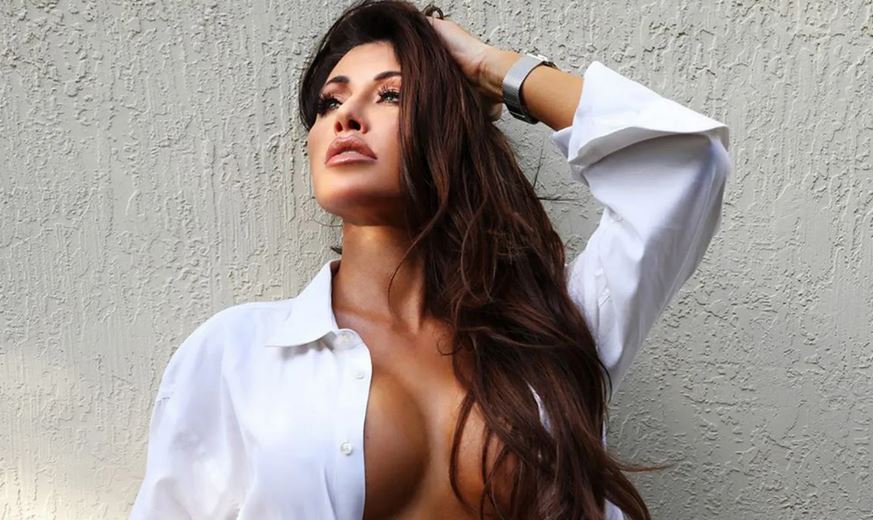 She has a net worth of $6.5 million. Holly Sonders earns an average of $2 million each year.

Not to mention that she participates in brand endorsements, such as the one revealed with the Cobra Puma Golf, which also serves as one of her methods of making money.

In addition to this, Holly is a yoga instructor, which has also contributed to her income.

Holly Sonders is also a model on the social media platform Instagram. 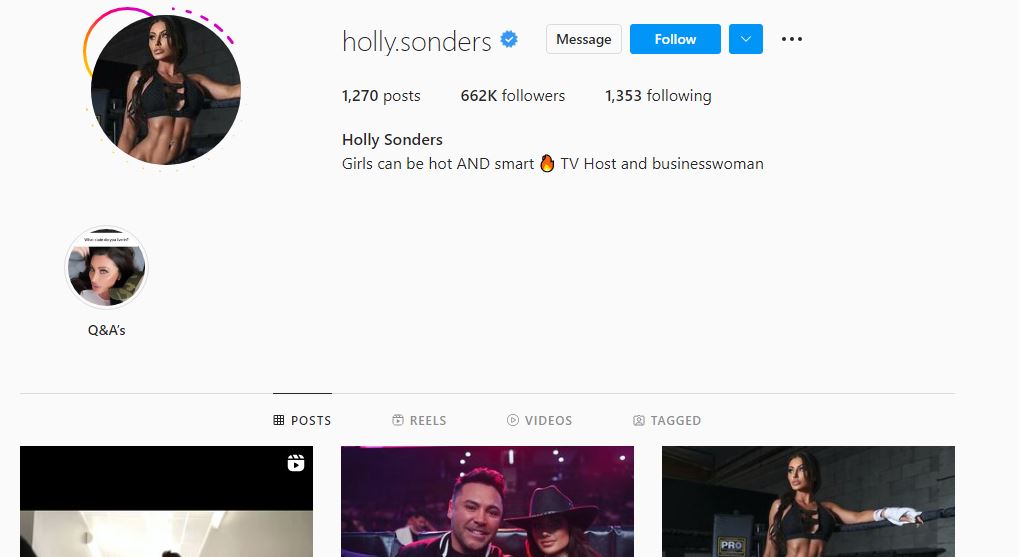 Holly Sonders is an active member of the social media fraternity, much like most renowned people worldwide.

The majority of her activity can be seen on social media platforms like Instagram and Twitter, where she engages in conversation with her enormous number of friends and followers.

Holly Sonders is one of the most successful female television hosts in the United States. 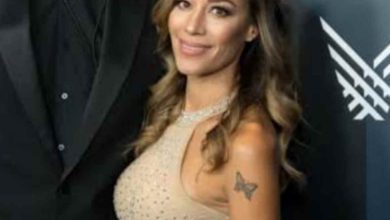 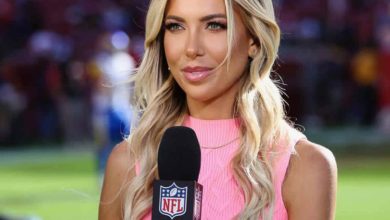