Karim Benzema bagged a brace alongside one each from Nacho Fernandez and Vinicius Jnr scored as Real Madrid beat Deportivo Alaves 1-4 in the Spanish laliga opening game, MySportDab reports.

Both teams kicked off the game with same mindset of getting a win which looked likely to get for either sides who claimed a fair share of the first half. 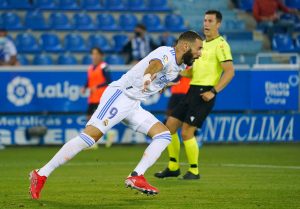 Deportivo Alaves had things going well as they were able to make sure their back was well intact as they push forward hoping to make something happen.

It wasn’t all good for Real Madrid who had control but couldn’t make anything happen as new manager Carlo Ancelotti made some huge changes to the team that have Gareth Bale.

Nothing could come out of the game as the opportunities kept on coming but nothing good that could result in a goal which proved difficult to happen.

It ended with Deportivo Alaves 0-0 Real Madrid as the first half finished with both sides heading for the break with a goalless scoreline in the 45 minutes.

It was an eventful second half which saw the Los Blancos making it count with more coming from them which saw goals being scored between the two teams.

Real Madrid finally broke the deadlock in the 48th minute of the game after a cheeky flick from Eden Hazard which Karim Benzema volleyed home to give his side a 0-1 lead in the encounter.

It wasn’t going good anymore for Deportivo Alaves in the second half as they lost control of things which left their defense open and unable to soak in all the pressure coming.

Nacho Fernandez made it 0-2 in the 56th minute with Luka Modric making the assist which saw the Spaniard ensuring his finish was top-notch to extend the lead.

Karim Benzema made it his brace in the 62nd minute after another amazing goal from the striker who made sure the scoreline turned 0-3.

Joselu pulled one back from the penalty spot to make the scoreline 1-3 after pressure caused the away side to commit a foul which led to the referee pointing to the spot. 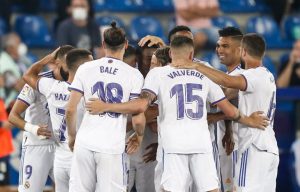 Vinicius Junior scored another one to extend the lead further to 1-4 in the 90th plus minutes as new signing David Alaba provided the assist for the goal.

The match finally came to an end with Deportivo Alaves 1-4 Real Madrid as Carlo Ancelotti marks his return my claiming all three points.

Chelsea 2-1 Lille, Tammy Abraham & Azpilicueta On Target As Blues Progress To Next Round