Bayern Munich have named their asking price for Kingsley Coman who is being targeted by Manchester United and Liverpool, MySportDab reports.

The forward has been a subject of potential move to England with two top clubs eyeing an agreement with the Bavarians.

Manchester United and Liverpool have now known their fate and what they need to do if they want to sign Kingsley Coman this summer window from Bayern Munich.

Both English team are looking to make a bid for the 25 year old but from the look of things right now, they won’t be looking to spend that big on the player.

With United looking to officially announce Jadon Sancho, they won’t be needing to make a move if possible but unless the Bavarians will be looking to lower their demands. 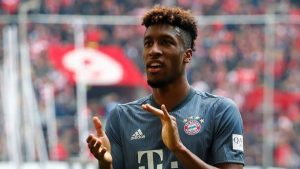 Bayern Munich have set their final asking price for French winger Kingsley Coman, according to reports from BILD.

Manchester United and Liverpool have both been strongly linked with the 25-year-old, who has now been valued at €90 million (£77m/$107m).

However, Coman thinks such a deal is unrealistic in the current financial climate, and expects to see out his contract through to 2023.

The only way a deal can be reached will be if Bayern Munich decides to lower or allow player run out of contract as no talks of him extending yet.