Antoine Griezmann scored a late goal to help Barcelona win their last game of the season by 1-0 against Eibar, MySportDab reports.

An evenly balanced first-half encounter that provided no goals saw both teams creating numerous opportunities going forward in the game. 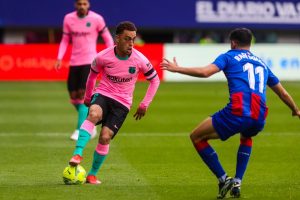 Barcelona was dominant as they played for nothing with them already falling out of the title race following their poor outings which pushed them behind.

Eibar did everything well in the first half despite them being pressured all through by their opponent who saw more of the ball possession.

Both teams continued to ensure they had things under control the way they should be as they entered an additional time for the first 45 minutes.

No goal scored as the first half ended with Eibar 0-0 Barcelona which they both headed for the break with a tied scoreline.

It was a good second-half encounter that saw just one goal being scored as the visitors ensured they celebrated at the end.

Eibar continued their fantastic work ensuring they didn’t concede a goal that could have been harmful to them in the encounter.

Barcelona did everything possible without a Lionel Messi who excused himself out of the last game, with nothing coming out with 70 minutes played. 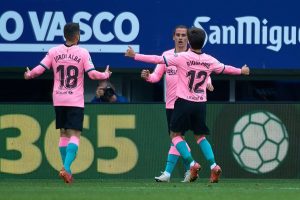 Antoine Griezmann scored with a bicycle kick in the 81st minutes of the game which resulted in a VAR check before the goal was allowed with the scoreline turning 0-1.

The game came to an end with Eibar 0-1 Barcelona which saw the visitors ending their 2020/2021 campaign with a victory in the bag.