Tottenham failed to hold on to their early lead through Tanguy Ndombele as Wolves staged a late comeback to play out a 1-1 draw with Spurs, MySportDab reports.

The first half of the late encounter was evenly matched as both side had a fair performance which saw the away side scored just one goal. 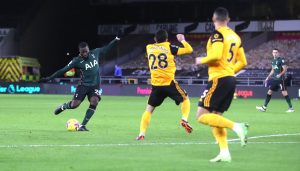 Tanguy Ndombele gave Tottenham and early lead in the 1st minutes after a nice good attack saw Jose Mourinho side took a 1-0 advantage.

Wolves did everything possible to comeback as they went on pressing very hard and creating numerous opportunities which none worked out.

The first half ended with Wolves 0-1 Tottenham as they both headed for the break with advantage going the way of the away side.

The second half was more energetic from both sides who seemed to do more at some stages of the game with the home side scoring one goal.

Tottenham continued to hold tight of their lead as Wolverhampton Wanderers attacked in  masses hoping to break down Spurs as the game progressed. 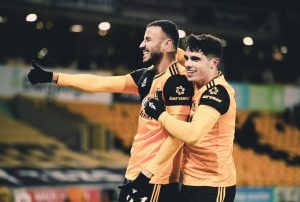 Wolves finally got the leveler which came in the 86th minute through Romain Saiss after a good buildup play saw Pedro Neto providing the assist to make it 1-1.

The match ended Wolves 1-1 Tottenham as both sides decided to settle for one point each after a very though encounter.