Robert Lewandowski hit brace as Bayern Munich thrashed Chelsea 4-1 in the second leg of the Uefa Champions League to progress with a 7-1 aggregate, MySportDab reports.

The first 45 minutes of the game provided three goals as both teams were on target in the encounter.

Bayern Munich scored the opener from the penalty spot through Robert Lewandowski after a foul by Caballero.

Ivan Perisic made it 2-0 in the 24th minutes after a nice play saw Lewandowski set up the Croatian for the second goal.

Chelsea pulled one back through Callum Hudson Odio but the goal was chopped off by VAR for offside.

Tammy Abraham later found the net in the 44th minutes to make it 2-1 before the end of half time.

The second 45 minutes of the match saw two more goals went in for the home side who were unstoppable.

Tolliso made it 3-1 in the 76th minutes after he dispatched neatly from a Robert Lewandowski assist.

The game was far away from a wounded Chelsea team before they knew what hit them it was late.

Lewandowski put the nail to the coffin as he struck his brace which saw the scoreline turned 4-1.

The match ended with Bayern Munich cruising with a 4-1 result over Chelsea to finish 7-1 aggregate. 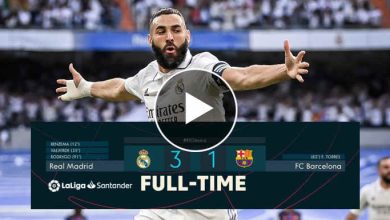