Aubameyang and Minamino scored as Arsenal won 5-4 on penalty against Liverpool to win the 2020 Community Shield after playing 1-1, MySportDab reports.

The FA Community Shield went down between both sides who looked to open the season with a trophy. 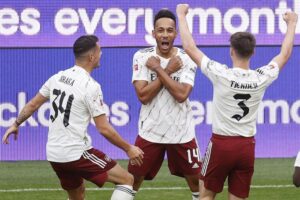 It proved to be an exciting first half encounter from both sides who looked lively.

Aubameyang made it 1-0 for Arsenal with just 12 minutes gone in the encounter with a stunning finish.

The goal came through a nice buildup which saw Bukayo Saka laid up the assist which the Gabonese scored.

Liverpool did everything possible to peg back level as the game progressed with the Reds attacking.

The first half ended Arsenal 1-0 Liverpool as Mikel Arteta side headed for the break with the advantage.

The second half was a back to back challenge as it provided just one goal before penalty kicks.

It was a second half encounter with lots of good plays by both sides who won silverware last season.

Minamino pulled Liverpool level in the 73rd minute as be dispatched neatly to make it 1-1.

On the other hand Arsenal did everything possible to make sure they kept their heads high defending.

The second half ended in a 1-1 draw as Arsenal and Liverpool headed for the penalty kicks after 90 minutes. 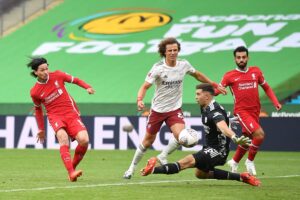 Both teams headed into the penalty kicks full of confidence with one side coming out tops.

Nelson and Mohamed Salah both scored their own spot kick as Maitland-Niles and Fabinho converted too.

Soares scored while Brewdster saw his penalty hit the crossbar, David Luiz and Minamino made theirs count.

It ended Arsenal 5-4 Liverpool as the Gunners lifted the FA Community Shield from penalty kicks.