France qualified for the quarterfinal of the 2022 World after a deserved 2-1 win over Denmark, with Kylian Mbappe bagging a brace, MySportDab reports.

It was a cagey affair as the first half began, with France looking more dangerous when going forward. 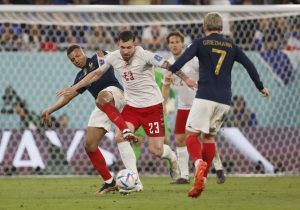 Denmark gave a better performance, and competed favorably well with the French team in terms of ball possession.

But France still had a better advantage and delivered a threatening attacking pace down the Danish box when in possession of the ball.

None of the two sides were able to find the back of the net as the game progressed. The French side was closer to an opening goal, having come across a series of chances. 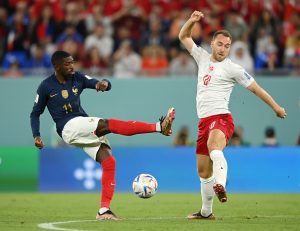 The match headed toward the final minutes of the first half, and it was still goalless.

The Les Bleus were more prolific; they had 12 good shots, with two on target, while Denmark had only two shots, with none on target.

However, Denmark had more possession of the ball, with 51%, while France managed 49%.

But both sides had the same number of passes; 225 each. The first half ended on a barren note, with both sides unable to score.

France started on a good note as the second half began.

They dominated possession in the early minutes and increased their attacking drive to try and get something out of the game. 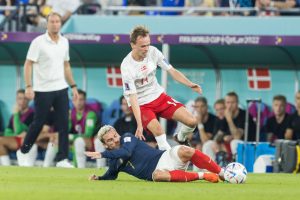 The game remained barren as both sides could not break the goal deadlock, but France were making frantic efforts to get ahead.

Les Bleus finally broke the goal deadlock in the 60th minute, with Kylian Mbappe giving the team the lead.

Seven minutes later, Christensen found an equaliser for Denmark, taking the scoreline to a 1-1 draw.

In the 83rd minute, Kylian Mbappe scored again to bag his brace and power France to a second consecutive win in the group.

The game ended with France defeating the hard-fighting Danish side to top the group and qualify for the quarterfinals. 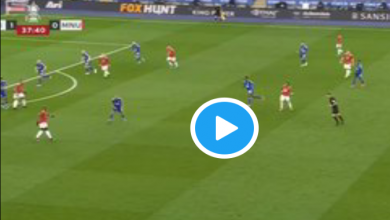