Atletico Madrid has confirmed their decision on Matheus Cunha and Joao Felix amid interest from Manchester United, MySportDab reports.

Manchester United director of football John Murtough has reportedly flown to the Spanish Capital to disclose their interest in signing Cunha and Felix. 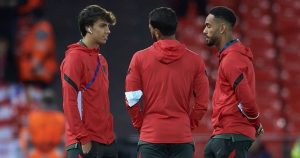 As per Fabrizio Romano, Atletico Madrid has clarified their position to Manchester United about the two forwards.

In the case of Cunha, the Spanish giants have made it clear that they will not accept a £50m bid for the player.

John Murtough had direct contact with Atletico and the answer was negative. pic.twitter.com/BW2VfUWFs3

The Red Devils had made a £45m bid on Cunha and may possibly improve the offer if Atletico gives more green light on the willingness to sell.

On Joao Felix, the club has ruled out any possibility of the France international leaving the club this summer.

They made it clear that Joao Felix is not for sale, neither will they accept a £50m offer for Cunha.

This may be a significant blow to Manchester United, who are keen on revamping an already shambolic squad.

As the transfer window edges toward closure and Erik Ten Hag is under pressure to sign mite strikers and midfielders before the window runs out.

The Red Devils’ first two matches were a disaster, with two heavy defeats coming from the most unlikely teams in the Premier League.

Meanwhile, Manchester United has been linked to several players in the last few days.

The likes of Casemiro from Real Madrid has also been linked to a move to Old Trafford, including Rabiot, Arnautovic, and others.