The striker has been linked with a move away from Old Trafford this January with Barcelona being the favorite team to land a move.

Edinson Cavani has seen his place as Manchester United leading striker taken away since the arrival of Cristiano Ronaldo. 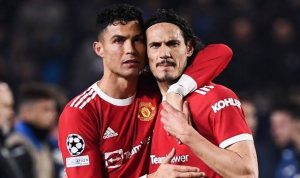 The Uruguay International has seen his playing time cut short despite his performance from last season which led to him extending his contract.

Although of recently Manchester United interim manager have found a way to play him alongside Cristiano Ronaldo which hasn’t been working out good.

They have been struggling with results which has seen many fans doubt the abilities of the manager to give them what they need.

Edinson Cavani is that one striker who has been targeted by Barcelona who are looking to sign him away from Old Trafford.

Ralf Rangnick confirmed the striker won’t be leaving this January after holding talks with him about his transfer options out of the club.

Fabrizio Romano confirmed the latest development between the club and the player who will be staying.

Ralf Rangnick: “I spoke with Edinson Cavani almost half an hour, he told me he will definitely stay at Manchester United this January.

“I can rely on him to give his very best, and to be a role model for young players.

This put a rest to the news of Edinson Cavani leaving this January as Barcelona might be coming back to force a move. 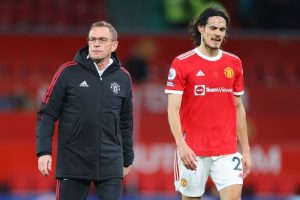 The laliga side looks like they have failed in their attempts to sign Atletico Madrid striker Alvaro Morata who is on loan with Juventus.

Anthony Martial is also another player that might leave Manchester United with Barcelona also interested in making that move happen.