Goals from Marquinhos alongside Gabriel Barbosa and Antony saw Brazil coming from behind to beat Venezuela 1-3 in the World Cup qualifiers match, MySportDab reports.

The game started well as both sides had their fair amount of control and opportunities going forward in the first half of the encounter.

Under 10 minutes the game was evenly balanced with both teams doing enough going forward and defending as it progressed. 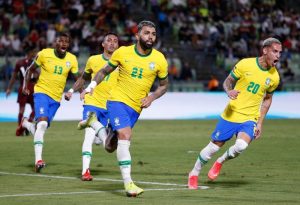 Venezuela drew first blood as Eric Ramirez scored in the 11th minute after an attack by them ended up in the back of the net to give them a 1-0 lead.

The match continued with Brazil pushing forward as they couldn’t be able to level things immediately despite all their attempts in getting the equalizer.

Nothing could be done by Brazil who ended the first half down behind 1-0 against Venezuela as they both headed for the break.

The second half was a different game entirely which saw more coming from the Brazilians who were unstoppable going forward and getting the job done.

It wasn’t that easy in the early stages of the second half which saw Venezuela holding their ground and made sure their defending was perfect.

Brazil had to wait until the 71st minutes before getting the leveler which was scored by Paris Saint Germain defender Marquinhos to make the scoreline 1-1 from a classic goal.

The pressure continued coming from the away side who were better in attacking as it paid off with Gabriel Barbosa scoring from the penalty spot in the 85th minute after a foul. 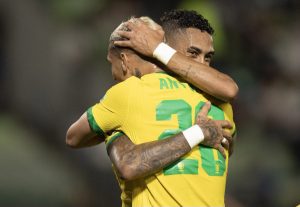 It didn’t look good for the home side who saw their lead snatched away as things continued to go back with Antony making the scoreline 1-3 in the 95th minute.

The game ended with Brazil claiming a 1-3 win against Venezuela which sees them extending their lead at the top of the group to 27 points with Argentina far behind them.