Wolves Vs Man United played out a 1-2 result which saw the red devils claiming a good win with goals from Anthony Elanga and Juan Mata, MySportDab reports.

The first half of the encounter was entertaining with both sides finding the back of the net as the visitors had more of the goals. 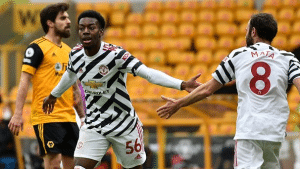 Man United broke the deadlock in the 13th minute of the game as youngster Anthony Elanga scored a beauty which made it 1-0 for the red devils.

Wolves pulled back level in the 39th minute after a nice build up play saw the home team ensuring the scoreline turned 1-1 with a good finish from Nelson Semedo.

The visitors took back the lead after a foul committed which saw Juan Mata stepping up to convert from the penalty spot to make it 1-2 in the 49th minute.

The first half of the encounter finished with Wolves 1-2 Man United as they both headed for the break with an advantage over to the visitors.

The second half started well with both sides creating early opportunities while going forward with hopes of changing the scoreline.

Man United ensured their lead was intact as they carried on pushing forward hoping to take the lead solid with their opponent making sure nothing went past them.

Wolves were more solid at the back of the defense which also saw them making some good runs but couldn’t make it count despite all their efforts. 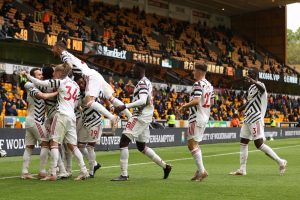 More coming from both teams who created opportunities going forward but none coming close to scoring as the game entered into the 70th minutes.

The encounter finally came to an end with Wolves 1-2 Man United which saw the red Devil’s finalizing their season with a banging win against their opponent.