Man City lost to Brighton And Hove Albion 3-2 as Gundogan and Phil Foden both scored for the Premier League winners, MySportDab reports.

Both teams had it good and bad in the first half of the encounter which was filled with so many talking points. 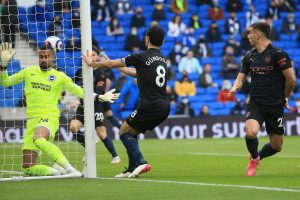 Man City set the ball rolling with an early goal in the second minutes which was scored by Gundogan after teaming up with Riyad Mahrez to make it 0-1.

Brighton And Hove Albion had things back in balance for them as they pressured Joao Cancel into getting a red card in the 10th minute after a bad challenge.

The game opened up more after the red card as the home side continued to soak in all the pressure as they also launched attacks which were dealt with easily.

The first half of the game ended with Brighton And Hove Albion 0-1 Man City as they both headed for the break with an advantage over to the visitors.

More coming from both teams who made things happen in the second half of the encounter which more goals coming from them.

Brighton And Hove Albion continue to press forward but unfortunately were caught off-target as Phil Foden makes it 0-2 in the 48th minutes.

Man City finally conceded in the 50th minute of the game as Trossard scored a stunner which made it 1-2 for the home side.

Adam Webster leveled things 2-2 in the 72nd minute after another good build-up from play which saw the scoreline turned into a tie. 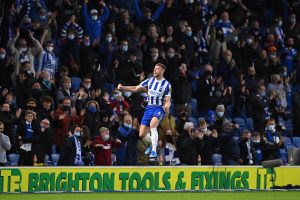 Another 76th minutes goal was scored by the home team which came through Daniel Burn who made it 3-2 with an outstanding finish.

The game finally came to an end with Brighton And Hove Albion 3-2 Man City as the home side staged a comeback to win the game.