Kai Havertz and Jorginho both scored as Chelsea outclassed Everton at home 2-0 which saw them claiming all three points to move 50 points on the table, MySportDab reports.

It was almost an evenly balanced first half encounter but one goal from the London side showed the difference as they dominated play and created more opportunities. 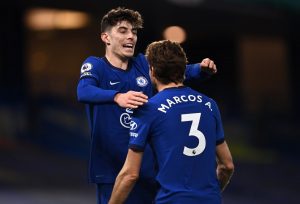 Everton was the side who were behind as their opponent controlled play which saw them going close with Timo Werner but unfortunately, his strike was wide.

Chelsea finally broke the deadlock in the 31st minutes after a nice buildup play saw a fine pass inside which Kai Havertz lashed on and deflected through Ben Godfrey to make it 1-0.

The first half of the encounter ended with Chelsea 1-0 Everton as both teams headed for the break with the advantage going to the way of the home side.

The second half of the encounter kicked off with more pace from the two teams who looked lively and eager to make something happened.

Kai Havertz scored another goal in the 54th minute of the game which was ruled out by VAR after a review that showed the German already committing a handball.

Finally, Jorginho made it 2-0 for Chelsea after a good attack saw Havertz fouled inside the box which a penalty was awarded, which led to the goal. 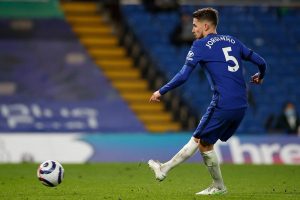 The game carried on without any goal coming from the two teams which should some good quality going forward as they attacked each other.

The match finally ended with Chelsea 2-0 Everton as Thomas Tuchel side carried on with their unbeaten run after the victory.