Late goal from Paul Onuachu helped Nigeria beat Benin 0-1 in the AFCON qualifiers which sees them already qualified for the tournament, MySportDab reports.

It wasn’t a pleasant first half encounter as both sides couldn’t find the back of the net despite the number of chances created. 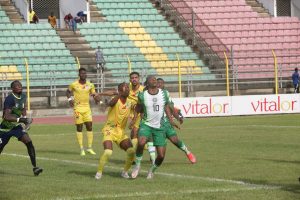 Benin’s goalkeeper was mostly the hero of the game as he managed to make some good efforts which kept his side in the encounter.

Nigeria Super Eagles were poor with most of their passes being misplaced but one good thing was they were able to make attempts on goal which didn’t go in.

The first half progressed without anything coming out of it as it ended with Benin 0-0 Nigeria as they both headed for the break with a goalless scoreline.

The second half of the encounter was much entertaining with lots of firepower coming from the Super Eagles in the early minutes.

Nigeria continued to create more goal scoring opportunities while their opponent couldn’t do much about it than to make sure they don’t concede.

Benin was doing all they could to keep their visitors from scoring and they did so very well while David Kiki and Sessi D’Almeida both received yellow cards.

The game progressed with more chances created from both sides but still nothing was able to hit the back of the net with the away side coming close. 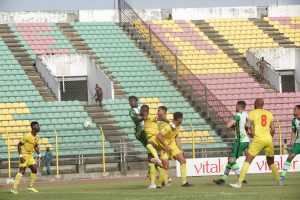 When it was coming to an end Paul Onuachu came to the rescue and scored an amazing goal in the 94th minute to make it 1-0.

It finally came to an end as it was Benin 0-1 Nigeria which saw them both shared the points after an entertaining encounter without a goal.