Real Madrid eased past Eibar by 3-1 as Karim Benzema and Luka Modric scored in the first half while Lucas Vazquez struck in the second 45 minutes, MySportDab reports.

The first half of the encounter was entertaining with both teams finding the back of the net in a 3 goal thriller. 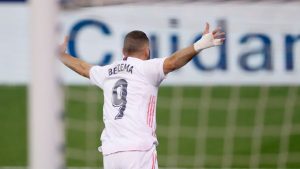 Real Madrid took an early lead in the 2nd minutes as Karim Benzema scored a fantastic goal to give his side a 1-0 lead in the match.

Eibar failed to tightened up their defense as Luka Modric increased the lead to 2-0 in the 13th minute of play with a fine finish.

The home side pulled one back through Kike in the 28th minute as that was the last goal before the first half ended with Eibar 1-2 Real Madrid.

The second half was more of the same as Los Blancos added to that lead with them dominating the entire game.

Real Madrid continued to press for more goals as they kept their defense locked with letting any goal in while they go forward. 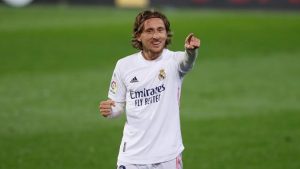 Eibar on the other hand had more work to do as they continued to fight hard to pull back level which didn’t work.

Lucas Vazquez scored a late one as it ended with Eibar 1-3 Real Madrid with Zidane men going level on points with leaders Atletico.