The first 45 minutes encounter was tough for both sides as they both scored one goal each. 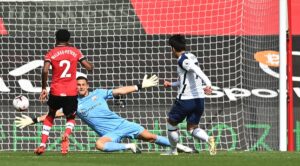 It was Spurs who showed more tenacity going forward as they threatened more which saw Southampton conceded an early goal.

Harry Kane scored in the 3rd minutes but the goal was ruled off after VAR reviewed it, the goal was chopped off.

Danny Ings later scored in the 32nd minute to give his side the lead after a stunning goal from the England striker.

Tottenham was able to pull level before the end of the first half as Heung-min Son scored to make it 1-1.

The first half of the match ended Southampton 1-1 Tottenham, with both sides settling for a draw.

The second 45 minutes was much exciting as play opened up more with both sides going at each other.

Harry Kane And Heung-min Son combined once again to put Tottenham 2-1 ahead with just 47 minutes gone in the second half.

The game progressed with Southampton pushing for the equalizer which proved difficult to get as the match went on.

As the game progress, Heung-min Son got his hat trick in the 64th minute with Harry Kane once again with the assist.

Once again the dynamic duo combined to make it 4-1 for Spurs in the 73rd minute of the encounter.

Harry Kane finally makes it 5-1 in the 82nd minute as he converted from a lose ball inside the box. 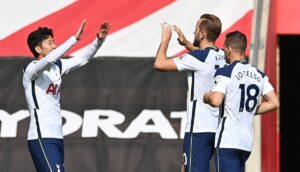 Danny Ings scored from the penalty spot to make it 2-5 after the Spurs defender committed a foul. 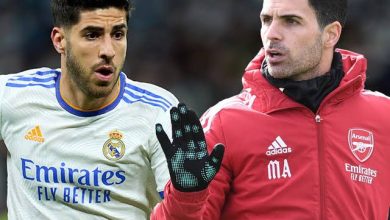