Liverpool outclassed 10 men Chelsea in a 2-0 result which saw Sadio Mane scored a brace after Christensen sent off after VAR review, MySportDab reports.

The first 45 minutes of the encounter was good enough for both of the team which saw Christensen sent off. 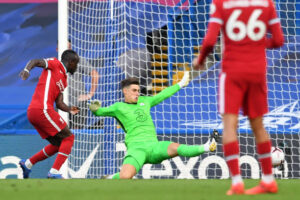 An entertaining game for both sides who came in ready to win and claim all three points.

The game went on with both sides pressing but no goal to report as the first half is tough.

Liverpool created lots of chances but failed to capitalize on them to make it count in the game.

Chelsea was holding off better until Christensen was sent off late in the first half after he fouled Sadio Mane.

The first half ended Chelsea 0-0 Liverpool as both teams headed for the break with a goalless draw.

The second 45 minutes of the game was hell for the home team who were one man down after the first half sent off.

Sadio Mane finally set the ball rolling as he scored with a header to give Liverpool a 1-0 lead with assist from Firmino.

The game progressed with Chelsea defending for their lives as they were being pegged back all through.

Sadio Mane makes it 2-0 in the 54th minutes as he scored after an error from Kepa Arrizabalaga who pass the ball to the Senegalese. 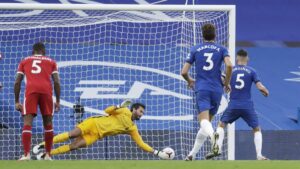 Jorginho was presented with a chance to give Frank Lampard side something to hold on to but he missed a penalty.

The match ended Chelsea 0-2 Liverpool as the Reds maintain their 100% start in the Premier League new season.