Manchester United are closing in on a deal for Borussia Dortmund winger Jadon Sancho, MySportDab reports.

The Bundesliga Club are now willing to accept £60million up front plus add-ons.

United still have to negotiate other parts of the deal and how the payments should be made.

Last week, Dortmund made it very clear that any deal must be above their £100million Price-tag but also has changed since the coronavirus lockdown.

Before the pandemic, they were ready demand £120m from any buyers but they have now reduced to £100m asking price.

MySportDab understands United are willing to strike an agreement which includes add-ons, around factors such as  Premier League appearances, trophies, and Champions League progress. 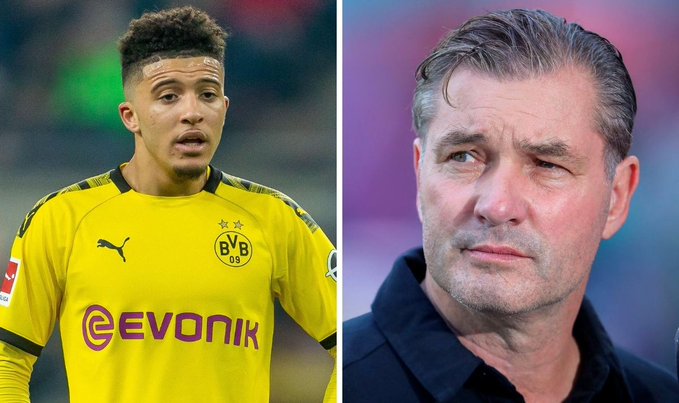 Sancho clearly wants a return to England after enjoying a shocking rise in the Bundesliga.

He was dropped to the bench by Coach Lucien Favre for the final two Bundesliga matches of the season, which would suggest Dortmund are already working on his replacement.

Now According to The Independent, United have convinced Dortmund to sell for £60m upfront and the German club are ready for the deal to go through.

There is still no official bid on the table from United despite reports last week.

That’s why both clubs are relaxed about the negations with Dortmund and they are both working together to reach an agreement.

On Thursday, there were reports from Germany that Sancho would prefer a transfer to Liverpool over United.

While it remains unknown whether that is true, Liverpool do not have the finances to sign Sancho this summer except if Sadio Mane or Mohamed Salah left.

If we're all on the same team, we'll never be defeated. #YouCantStopUs #TeamNike @Nike pic.twitter.com/7hgYdZ2doJ

Ole Gunnar Solskjaer’s desire to bring him to the club will work perfectly with Sancho and the No 7 shirt is waiting for him at Old Trafford.

The United boss has also spoken with his England internationals Marcus Rashford and Harry Maguire to get the lowdown on Sancho’s key attributes.

Borussia Dortmund do not want the negotiations to drag on over the summer and they are aware there are lots of work to be done in the Bundesliga.

They have already signed former Birmingham sensation Jude Bellingham, ahead of Manchester United.