Erling Haaland inspired Dortmund to a 4nil thumping of Schalke as the Bundesliga season resumes from coronavirus break, MySportDab reports.

Haaland continued his impressive form as he opens the scoring for Dortmund with just 29 minutes played.

Thanks to Thorgan Hazard who delivers a teasing cross that meets the young Norwecommitted he made no mistake scoring. 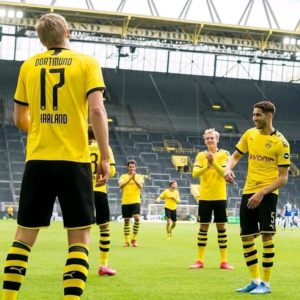 Before the end of half time, the home team increased the lead to 2-0 as Raphael Guerreiro scores from a Brandt assist.

The second half began with Schalke still chasing the game away from home as they look to cut down the lead.

It took Dortmund 49 minutes to make it 3-0 with Thorgan Hazard beating the keeper with an outside strike.

The game went on with the home team bossing the away side and everything was going as planned for BVB.

Both teams got both players on the referee books for fouls committed with Sane and Delaney being the culprits.

BVB increase the lead to 4-0 as Raphael Guerriero once again got on the scoresheet after scoring a stunner. 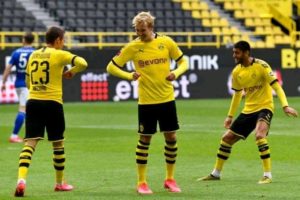 Some neat football from Raphael Guerreiro who played a 1-2 pass with Erling Braut Haaland.

Borussia Dortmund ended the game with the 4-0 victory as they continue to impress in the Bundesliga.