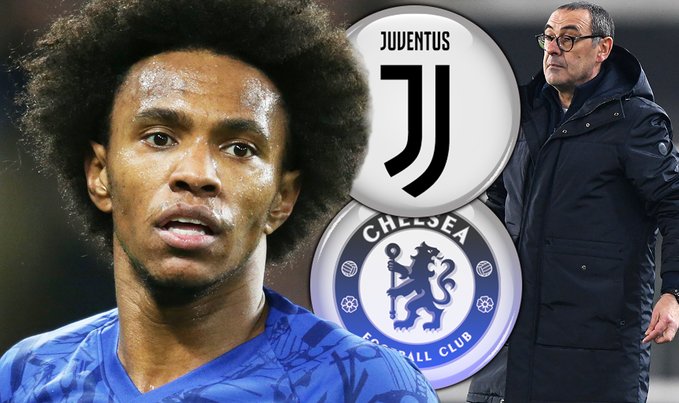 The 31-year-old is yet to sign a new contract despite being offered a new one-year contract, and will now become a free agent in the summer unless he signs the deal.
MySportDab understands Willian wants a two-year contract and the two sides are yet to reach an agreement, Juventus remain interested in Willian, and are monitoring his situation.
The Serie A giants made contact with Chelsea for Willian in the summer, but the Brazilian is not comfortable working under Maurizio Sarri who left Stamford last season.
However, Sarri is currently under pressure after poor recent result , including Thursday’s Coppa Italia semi-final first leg at AC Milan ending 1-1 after another poor performance, making it just one win in four matches.
The signing of Hakim Ziyech from Ajax this week has given Chelsea Coach Frank Lampard more attacking options ahead of next season.
Also, The signing of Ziyech means Willian’s future is uncertain at Stamford Bridge as Frank Lampard looks to improve his squad.
The Moroccan international’s transfer was confirmed yesterday, and Chelsea will £33.36 million which could rise to £36.7m due to add-ons. He will officially become a Chelsea player on July 1.
Chelsea though may have worries about another winger, former Borrusia Dortmund player Christian Pulisic.
The 21-year-old has been out injured for over two months after a serious Achilles tendon problem.
Coach Frank Lampard had hoped that the American would be back just after the winter break, but Pulisic is still a major doubt for Monday’s match against Manchester United at Stamford Bridge.
Download MySportDab Official Android App HERE
Join MySportDab Active Telegram Channel Now – Click to Join
Share Now:
READ MORE:  Chelsea And Liverpool Lead Race For Sancho (DETAILS)
Adedotun Osi-EfaFebruary 14, 2020
0 3 1 minute read
Facebook Twitter LinkedIn Tumblr Pinterest Reddit WhatsApp
Share
Facebook Twitter LinkedIn Tumblr Pinterest Reddit VKontakte Share via Email Print