Like MySportDab Facebook Page HERE
Join MySportDab Active Telegram Channel Now - Click to Join
The Italian Serie A have postponed all matches meant to be played this weekend including Juventus vs Inter Milan after Coronavirus outbreak in the country, MySportDab reports. 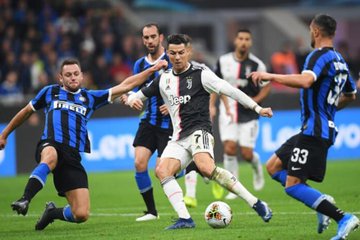 The games have been officially reschduled for May 13.
It means the title showdown between former Chelsea Coaches Maurizio Sarri and Antonio Conte will be on hold.
Parma vs SPAL, AC Milan vs Genoa, Udinese vs Fiorentina and Sassuolo vs are the other match that will not be played this weekend.
MySportDab understands These matches were ready to be played before behind closed doors but alot has changed due to deadly virus.
Napoli vs Torino, Lazio vs Bologna, lecce vs Atalanta, Sampdoria vs Hellas Verona and Cagliari vs Roma will all still be played this weekend.

OFFICIAL | #JuveInter has been postponed until Wednesday 13th May 2020, in compliance with the “Urgent measures for the containment and management of the epidemiological emergency of COVID-19”.