Paul Pogba has showed off his new haircut as he works on his full fitness inside his own home, MySportDab reports.

The Manchester United midfielder has decided to completely shave the locks to sport a bald head while at home with his family.

Everyone in the UK were told to stay at home by the government due to the ongoing coronavirus pandemic, which made Pogba to share a video urging his fans to stay indoors.

MySportDab understands Pogba also showed off the ‘PP Arena’ – a small recreational center within his home where he enjoys playing the football with his young son and training. 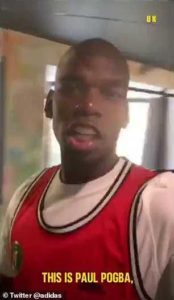 As part of adidas’ #hometeam initiative, Pogba said: ‘This is Paulll Pogba, aka “La Pioche”. Here at the PP Arena.

‘I spend most of my time here at home in confinement.

‘I’m with my little one. We’re just playing football, fooling around. I always dribble past him until he’s old enough up and does the same! 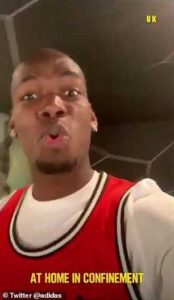 ‘There are so many things you can do at home with a garden, if you’re inside…

‘Even in an apartment with a foam ball, like back in the day. We play, we always break things, we say sorry to our parents and carry on – I’m joking!

READ MORE:  Sadio Mane Better Than Aubameyang And Others? He Is The 'BEST STRIKER' In England

Pogba is following government guidelines about staying at home which has lend to a social media trend of various skill such as the #StayAtHomeChallenge.